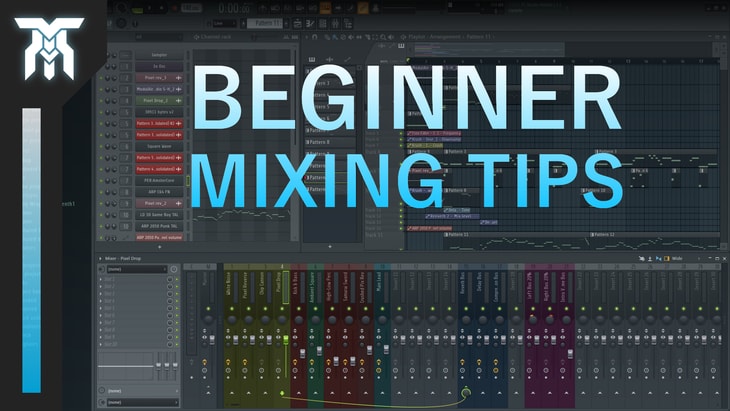 These mixing tips for beginners are great if you're just starting out or if you've hit a plateau and are looking to improve your mixing.

This post is going to break down some of the most fundamental and important mixing tips and techniques that you can be applying to your audio production.

Whether you're a sound designer or a composer, stick around. These tips are gonna help you make a better mix and they can be applied in any DAW.

There's more to mixing than just moving faders, which is just changing the volume of each track. Now, you put everything into specific tracks so you can manage them independently.

But, you don't have to put everything in a separate track, like when using a mix bus.

This is when you route a few different tracks to a single track so you can apply one thing that will affect multiple elements in your mix.

This could really be anything but for example, you might have the same effect with the same settings on many tracks.

Using a mix bus, you can cut it down to one effect and save yourself a lot of time and CPU usage too.

But like I said, a mix bus could be used for many things like panning, volume, automation, etc.

This leads me to the next tip which is parallel compression. Now, pay attention because this can be applied to any effect, not just a compressor.

First, send the original track without the effect to an empty track and make sure the original is still going to the master track.

Then, apply a compressor to the track you just sent it to. This lets you keep the original dynamics while adding in a thicker version of it that's been heavily compressed.

This will increase the decibel level since there are two outputs now, so lower the level on both the original and the send track and mix it to how you want it to sound.

Now, here's a little bonus tip for how you can apply this technique to reverb too.

Since you will typically put a high pass filter on sounds that have a heavy reverb to prevent the low end from getting muddy, you can keep the low end of a sound by using parallel reverb.

Just like with parallel compression, send the original to a separate track without anything else going to it and apply your reverb to the send track (or mix bus).

You can either use a separate EQ to get rid of the low end before the reverb or simply use the reverb's built-in filter if it has one.

The rest is up to you, pan one to the right and the other to the left, cut out the high-end on one and the low-end on the other, etc.

To make a thicker sound, you can create two instances of the same sound and pan each to the opposite value.

For example, this might be setting one at 50% left and the other 50% right. The intensity of how far you pan each side is dependent on what kind of element it is.

This can be different for a lot of things as vocals and the kick drum are typically better when centered while instruments and supporting vocals are better suited in between the middle and hard left or right.

Spending a long time listening to something (especially when it's loud), can give you a false sense of levels in the mix. This is known as ear fatigue and can lead you to make poor mixing decisions.

Now, this isn't anything you should be freaking out over. From what I understand, it's simply your ears naturally compressing sound and the way to prevent this from happening is quite simple.

By mixing at a moderate volume and taking 15-minute breaks every two hours you should be good.

But, there are other factors such as your environment. It's said that if you're tempted to turn up the volume, take a break.

Now for the last tip. The way effect plugins are ordered in the mixer can change the final sound of the channel dramatically.

Take care in what you put before another and even switch things up if you're looking to experiment.

For example, reverb before delay will add echoes to the space. And, using delay before reverb will add space to the repeating echoes.

Essentially, the order determines what will be applied to what depending on what comes before it. Maybe obvious, but sometimes overlooked.

There you go, with those five tips you should be able to get more out of your mixing sessions. If you found this helpful, share it with a friend! Thanks for reading.