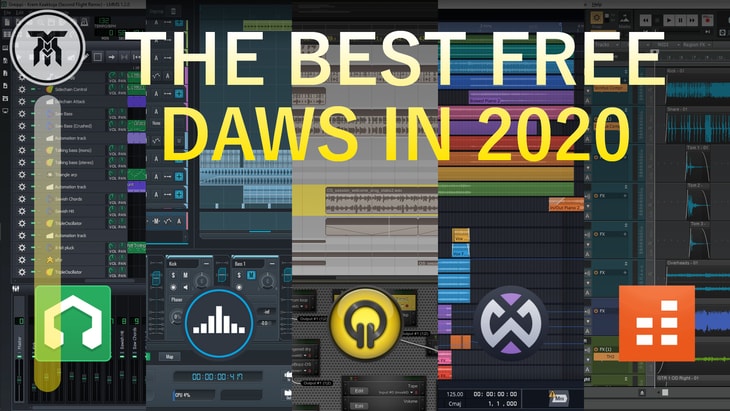 The best free DAWs to make music with, in 2020. In this list, you'll see the top 5 free digital audio workstations for Windows, Mac, and Linux, along with two honorable mentions at the end.

If you're a music producer, sound designer, or into the audio industry, you’re bound to find at least one that can keep up with you.

The best thing about free music production software is that it lets you try out something new and learn the basics without investing a ton of money into something you may not really enjoy.

Don’t take that the wrong way either, Pro’s use free DAWs too.

Each DAW mention in this post will include the following:

And don't worry, none of these are free trials or restricted. They are all 100% Free, no strings attached.

In case you don't know what a DAW is, it's short for Digital Audio Workstation.

Essentially, it's a host for plugins you download such as virtual instruments and audio effects, not to mention all the audio recording, editing, and arranging you will do.

The first one in this top 5 is LMMS. This is a great choice, regardless of the operating system you use. With its availability on Windows, Mac, and Linux, it really makes music production accessible to anyone with a computer. it doesn't use much CPU either but, it is a very basic Digital Audio Workstation.

Oh, and it's even open-source, meaning it has been developed by a bunch of people - which could include you too if you wanted to contribute. There's even Computer Keyboard to MIDI, which means you can play virtual instruments with your computer keyboard as if it was a piano.

The Sequencer (or song arrangement window), isn't too bad in LMMS but it is very basic and doesn't offer a lot of freedom, but it still gets the job done and makes it easy to manage your samples and patterns.

It also comes with a step-sequencer, known as the beat-and-bassline editor in LMMS. This is a cool way to compartmentalize your arrangement and remove clutter as this also lets you put MIDI patterns into it.

This is what the piano roll (or MIDI editor) looks like in LMMS. It's pretty clean and easy to use, and has a great feature that lets you write any chord.. based on any scale.. with one click.

As for the mixer, it does have the same simplicity but it does come with the basics. And even though it looks dead-simple, it does include the ability to make a send track (or mix bus) just like every other DAW on this list.

The one drawback I found to kind of suck for this DAW is that you can't record audio. But, you can always use Audacity to record that and then import the audio files into LMMS.

At number two we have SoundBridge. This DAW started as Lumit when it was crowdfunded but it has had quite the evolution since then. This one is available on Windows and Mac as both 32 and 64-bit.

Just make sure to download your plugins in the same bit version as the DAW for them to work. So for example, if you downloaded the 32-bit version of SoundBridge, you'll need to download 32-bit plugins.

The center of this DAW is its sequencer and is definitely better than the one in LMMS. You get much more control over the tracks and each individual pattern. It's also directly linked to a panel that displays whatever you have selected, making it very easy to adjust an audio file or pattern.

For audio patterns, this includes extremely easy pitch, time, and volume controls to name most of them, but there are a lot for MIDI patterns too.

To write notes in those patterns, the piano roll in SoundBridge is good and lets you change the length of a MIDI note while you draw it instead of after in LMMS. But, LMMS does have some features over this one, as I mentioned with the one-click-chords.

Last is the mixer, and it does have a bit more features than the one in LMMS but they both have their pros and cons. I prefer this one though. And it even comes with a mini-view of the mixer that can be viewed while the sequencer is open.

The only downside is that it bugs you for a donation every time you open the DAW. 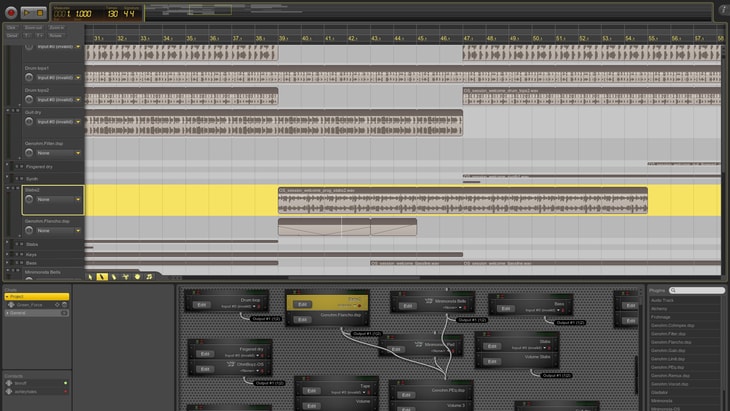 Next up we have Ohm Studio. As far as I know, it has something NO OTHER DAW HAS - Real-time Collaboration.

This means you can work on the same project at the same time with more than one person.. from anywhere in the world. You can also see what anyone is doing in the projects you choose to collab on, real-time.

There's even a general and project-based chat room in the DAW so you can talk to anyone currently using Ohm Studio or only those you are collaborating with.

The Sequencer has a bunch of flexibility though, letting you quickly zoom in and out of a pattern or the entire playlist, adjust volume fade points, loop, and resize in both directions. I do think this has a better sequencer than the last two DAWs, but the next one.. it has an impressive set of features.

And with it comes an interesting piano roll to say the least. Being located in each MIDI pattern, inside the sequencer itself, makes it one of a kind. Quite unusual but it's actually not bad at all.

As for the mixer, it is pretty straight forward and the guides help you understand what you can and cannot do. It comes with your typical features but it can also be switched over to a more analog kind of view. It even changes focus depending on what track you select in the playlist.

The two things I did notice that are a bit of a drawback are the fact that you can only export to OGG format with the free version and you need to be connected to the internet to use the DAW. OGG isn't that bad anyway but you can export to WAVE if you pay 39 Euros. 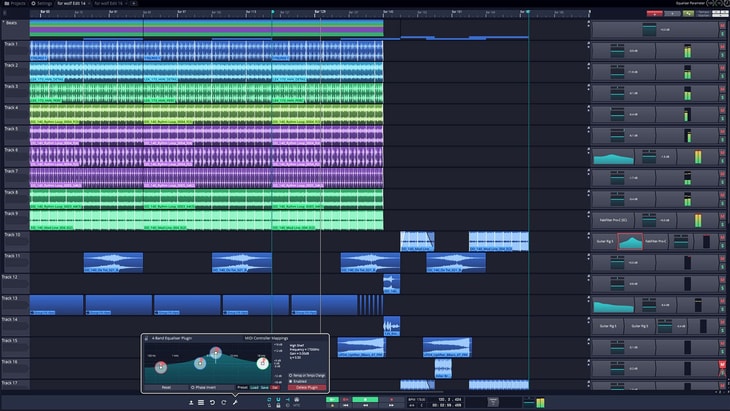 If you've used Tracktion T7 before, this may look familiar. That's because Waveform Free is the latest version of it - just with a new name. What Tracktion as a company does is every time they publish a new version of their paid DAW, Waveform, they will typically release an older version of it for free.

Now this DAW does have the ability to use your computer keyboard as a MIDI controller but it's kind of a hassle and awkward to use. But hey, at least it's there if you need it.

The sequencer in Waveform is kind of confusing at first. But once you get the hang of it, the workflow isn't all that different and it actually has a lot of unique features. You can anchor the MIDI and move the pattern around it, or vice-versa. And, it's super easy to bounce to audio, all you have to do is click this option and drag it.

Waveform's piano roll is really good. You can adjust the velocity of each note when you are drawing it by dragging up and down, and the width going right and left. You can even make chords with whatever notes you have selected.

As for mixing your audio, you can either use the integrated mixer to the right of the sequencer or a dedicated mixer window by going up to the top right and bringing it into view.

The mixer is quite standard but when it comes to making send tracks (aka a mix bus) they are called sub-mixes and have to be created in the sequencer but can then be routed in the mixer or the sequencer.

I had to save the best for last and that's Cakewalk by Bandlab. This DAW was once called Sonar when it previously cost money but it was acquired and made free-to-use!

From my experience, this has got to be the best (free) Digital Audio Workstation out there. And yes, it does have Computer Keyboard to MIDI but it's through a window that needs to be selected.

The downside is that Cakewalk is only available for 64-bit Windows - with 32-bit plugin support - so some of the previous options I talked about may be your only choice. If you can use this DAW though, I would highly recommend it.

In my opinion, this DAW has the best piano roll. There are a lot of features packed into it and it's easy to use. You definitely won't feel limited using this MIDI editor. And if you are a more traditional composer, it has a great notation editor that you can use to write sheet music.

As for the sequencer, I don't know if I can say it's the best on the list but don't get me wrong, it is good. Everything is where you need it and there are a lot of features, including a video display to edit the audio with the visuals.

There's a lot you can do with the mixer in Cakewalk and it has the most features out of all the DAWs in this video.

There is an integrated EQ window for quick changes and it's linked to a main EQ that's built into the "pro channel" on every track, including a compressor, the EQ I mentioned, Tube saturation, and a console emulator. Oh, and the EQ opens up into an even bigger EQ to make it easier.

Now, I would have mentioned Garageband but if you have a Mac, you probably either heard about it or have it already. But, I do think it would have made the list otherwise. So be sure to check it out if you use a Mac - especially if you are interested in using Logic Pro in the future.

Ardour is also a close-to-free option you may like. It does require a donation of $1 or more to get the pre-build but you can also get the source code and compile it yourself for free.

I hope this free software helps you make some great music, sound effects, or other audio-related projects. And as always, thanks for reading. 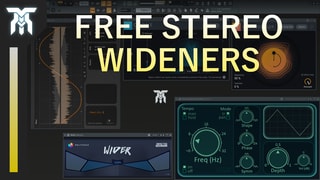 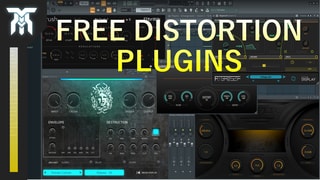 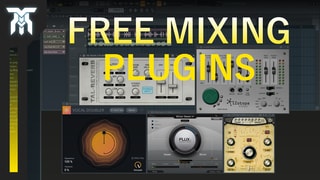