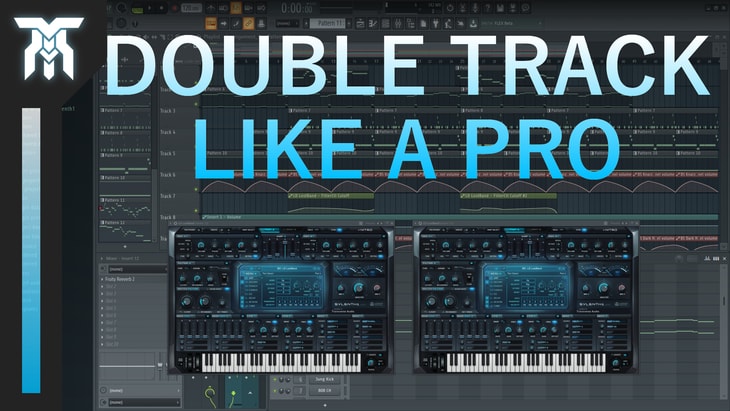 If you're wondering how to get a wider mix, there's a technique called double tracking.

This is where you take a sound, duplicate it, and route them to different mixer tracks. Then, you pan one to the far left, and the other to the far right.

But, leaving it like this can lead you to an unwanted side-effect.

If you want to learn about what that is and a bunch of techniques on how to actually make double-tracking work, stick around, this mixing tutorial will teach you how to properly do it.

Double tracking live instruments without doing anything else can work really well. But that's when you record two separate takes of the same notes being played.

This works because there is going to be some human error in the performance.

However, if you're doing this by duplicating a synth track with everything staying the same, this is only going to make the sound louder, not wider.

You see, there's technically no center in a mix. All it means is that a signal is sent to both left and right at an equal dB level.

Now if you look at what I just showed you, there is an equal amount of signal going to the left and the right, bringing you back to the so-called "center".

To make double-tracking effective for synths, you're gonna have to make some additional changes.

The first technique I want to show you is micro-shifting as it's probably the easiest to do.

This consists of a very subtle change in pitch for each track. What you would do is change the pitch of one, either up or down, by 5-20 cents.

Then, you would just change the pitch of the duplicated track to the same value in the opposite direction.

What this does is kind of fatten up the frequency output by, you guessed it, involving more frequencies.

It's kind of like a chord, but not really, and is more along the lines of what a chorus effect does.

At the end of this blog post, you'll basically learn how to make a DIY chorus effect.

Now, it's not going to make a huge difference yet but when we start to stack the rest of the techniques on top of this, it's going to get interesting.

The next technique is the Haas Effect, also known as the precedence effect.

This creates a wider stereo image by making two sounds seem like one when the delay time is roughly 40ms or less.

So, what you need to do for this to work best with a double-track setup is add a delay effect to only one of the mixer tracks.

To be on the safe side, you'll want to set the delay time anywhere between 10 and 35 milliseconds.

The reason is, anything below around 10ms is going to make it sound out-of-phase and apparently, the whole 40ms thing can vary from person to person.

So, lower than 35 milliseconds should be a safe place to put it.

Great, now we're starting to get somewhere. This last tip is going to be the cherry on top that lets you get the most out of double-tracking.

Making separate EQ changes to each of the two tracks is going to give the sound more width and obviously more difference.

What this may look like is a boost of something good in one and a cut in something bad in the other.

Or, you could roll off just a little bit of the high-end on one, and the same with the low-end on the other. Really, these changes are up to you.

Adding Your Own Choice of Plugins

If you want to take it even further, you can affect each track differently with plugins such as reverb, compression, and maybe tremolo or vibrato.

Leave me a comment below if you have any questions or would just like to say hi, I love talking to you guys, it's pretty cool. As always, thanks for reading!