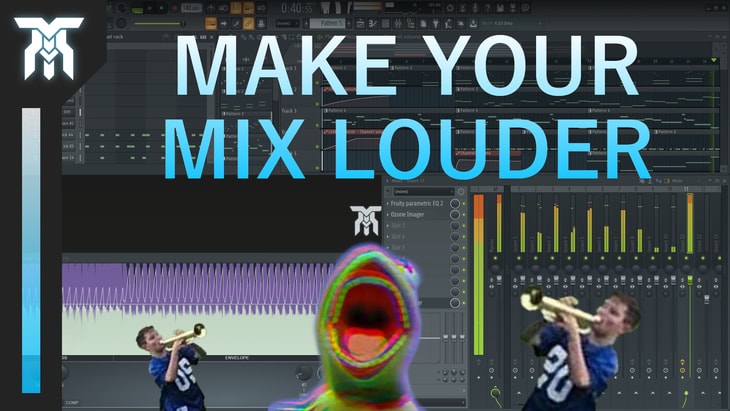 Making your mix sound louder can be hard without causing distortion or ruining the dynamics of your audio.

In this tutorial, I'm going to show you 3 ways to make your mix sound louder with compression, a little trick with volume automation, and careful decisions with EQ.

Stick around, this is pretty cool stuff.

Introduce Something High and Bring it Low

The first thing you can do is introduce something with a slightly higher volume and lower it back down to its original level once the rest of the elements come in.

This maintains attention to it, without permanently raising the volume of it and everything else in the mix.

It can really help with controlling the decibel level of everything and will allow you to bring more attention to other elements too, without drowning out the sound you'll be automating.

The way it works is the listener's ear will follow the sound into the section ahead, which could be the drop for example.

To do this, create an automation clip for the channel volume or pre-gain if you don't have that option.

Then, if your DAW's default for this is at or really close to 0dB, instead of increasing it, start from its default position and move it down to a lower level once other elements start playing alongside it.

And if it doesn't, you should be good to move it up to start from instead, as long as it doesn't pass 0dB.

And of course, this should be eased in, not a hard switch. Then you're going to want to mix this sound as if it was always at this lower level.

This means you'll probably have to increase the gain on the mixer track volume fader to account for this if you've already done some mixing.

Unless you were able to increase the pre-gain from its default.

But you'll still want to make sure it's not clipping or causing any other kind of distortion in the entire mix at its louder section when you first introduce the sound.

If you want to learn more about pre-gain and why I suggested decreasing instead of increasing, check out this article I made about Gain Staging.

Using a Compressor to Raise the Volume of Quiet Sounds

The next tip involves a limiter and how you can technically raise the decibel level of the quietest elements by reducing the dB of the loudest.

Now, it is important to not destroy the entire dynamic range, that is, the range from the highest and lowest decibel level of the entire mix.

To avoid this, you'll to want to use a limiter with subtlety in this case.

To tighten up your mix and make it a bit louder you can first put a limiter on your master track (or individual track) and then analyze the track's dynamic range.

If your limiter doesn't have a visualizer, you could use a plugin called Youlean loudness meter, which is free btw.

Once you know where the highest peaks are, lower the ceiling until you start to see a bit of the peaks getting compressed.

You can tell when they are by the purple and white lines, showing you where and by how much.

The objective with this is to keep everything within an appropriate region while still keeping some distance between the highest and lowest peaks.

Finally, the last tip involves a lot of EQ decisions that can help your mix.

Since the human ear is most sensitive to mid frequencies, that is where you'll have the most perceived loudness in a mix.

You can push a little bit of your kick into this range instead of the low end, which gives your bass more room anyway.

Having the kick and bass compete is another thing and it's something to avoid. Choose one to be the most important in the low end and make it dominant.

Don't forget that this can change over time too, like in certain parts of your arrangement, for example.

Another thing with EQ is cutting the low end on sounds that just don't need it.

All frequencies contribute to the loudness of a track, and if you have a bunch of information or sound that isn't contributing to your mix, it's taking up a lot of the "loudness real estate" so to speak.

Basically, removing or suppressing some of this can allow you to raise the decibel level of that instrument or sound.

Just add a high-pass filter with a very steep curve to trim off frequencies right below where the lowest activity is.

For most sounds, this is going to be something like 35-45 Hertz but would be more like 20 if it's your sub-bass.

Although it is important to have your mix at a level close to 0dB, you shouldn't try to slam everything as close as possible.

Be responsible about it and keep in mind that there is a trade-off between dynamics and loudness.

I also suggest that you keep your master track between -3 and -6dB to leave some headroom for the mastering phase.

It sounds kind of counter-intuitive but leaving this space lets you get everything as close to 0dB when your track is mastered, not mixed.

If you enjoyed, please share this with others. As always, thanks for reading.