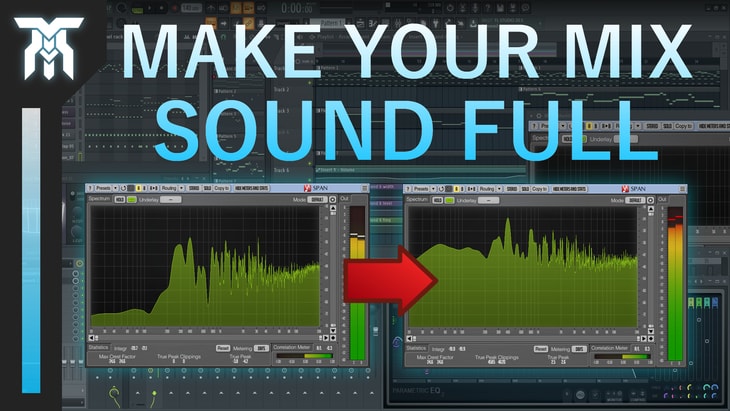 If you find that your mixes always sound empty or aren't as full as they could be, I'll teach you how to make your song or sound effect, sound full in this mixing tutorial.

The three main tips I'll talk about in this post are;

Now, of course, there is also compression and limiting. But since it's such a huge topic on its own, that's gonna be for another article. For now, let's get into this one.

I'll start with reverb. This can be used for sound design when heavily applied but also as a way to fill up some of the silence after a sound, without creating a wall of audio.

When used sparingly, you can keep the dynamics and make it sound more natural.

To get this kind of sound out of it, you'll want to keep some parameters under control;

I would keep the decay time between 1 to 2 seconds but does depend on how long it takes before the next sound is played.

And, although it may seem strange to remove something from a mix to make it sound full, using the low cut/high pass feature on sounds with lower frequencies can provide more clarity since reverb can start to blend things together down there.

That's why it's not good to put reverb on bassy elements. It is important to fill the mix but it's more important to give definition to what you're filling it with.

If using reverb on something is overkill or is just making something bigger than you want it to be, a delay effect is a great substitute.

Since these are essentially the same type of effect, a lot of the same principles apply.

Keep the feedback low so it doesn't carry on forever and interfere with other sounds.

This value can be very different depending on how you are using the sound.

Just trim it down to how many repetitions you want to hear, and try to line up the delay time to match the rhythm of your song or sound effect.

For both reverb and delay, you may want to solo the sound to reference how long it's going on for.

As I said, you don't want it to carry on longer than necessary.

The second way you can make your mix sound full is by observing what frequencies are not present in the entire mix and in doing so, you'll get a better understanding of how to fill that part of the spectrum.

To help you do this, you can either use a parametric equalizer or a spectral analyzer like Span which is free to download.

For example, you may be lacking a presence in the 1 to 2 kHz range.

To fill it you could either add in a sound like a woodblock or a clap. Or simply apply an EQ to something that occupies the area around it, like a snap if you have one in your mix.

Then, you would boost the frequencies I was talking about, to make up for the void in the range that isn't as full next to it.

Essentially, if its presence is really close to what you're lacking, you can nudge the frequencies over so they cover the empty part.

So to sum it up, you'll need to have something in most areas of the frequency spectrum to get a full mix.

It doesn't have to be the percussion or instrument you would expect either. As long as it takes up the same frequencies, it should be okay to use.

Alright, once you have most of the spectrum filled with samples and instruments, you can add subtle white noise in the background and automate it along your entire song to fill up the rest of the frequency spectrum.

What you'll be automating is the volume to match the overall energy of each section.

You can also automate the cutoff frequency or bands on an equalizer applied to the white noise to make most of its presence in what is lacking in that specific part of the song or sound effect.

Now be careful when using this trick, and it is a trick, you're tricking the ear into thinking it's just coming from the other sounds in the rest of the song.

Basically, you're not supposed to be able to point out that it's actually white noise you're hearing and this is more of a final touch.

You should only be able to notice it if you really, really try and focus on it.

Although these are only a few ways that you can make your mix sound full, I made a tutorial on mixing tips for beginners which goes over more!

I'm sure you'll like it if you enjoyed this one, and as always, thanks for reading.