How To Use Audio Distortion 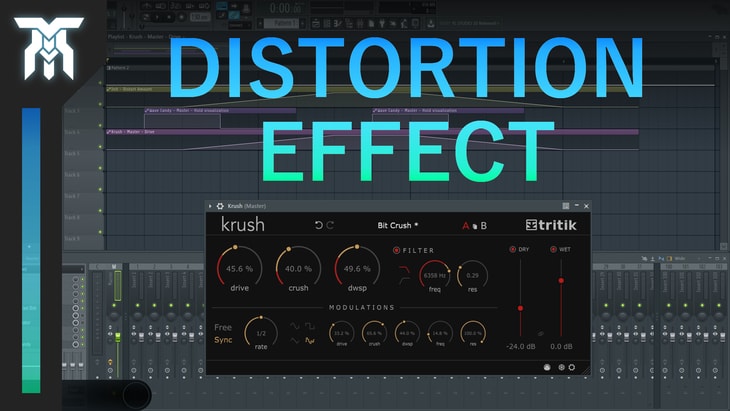 Distortion is a pretty versatile effect. If you're wondering how to use audio distortion to add warmth or some extra bite to your sounds, it does the trick. In this post, we’ll be going through the various types of this effect plugin such as Overdrive, Clip, Fold-back, Decimate and Bitcrush, so stick around if you want to learn what they all do.

If you have no clue what distortion is, that's fine! This is mainly focused on digital distortion in music and sound design but can be used in many forms of audio.

Amount: One of the most common parameters in distortion effects is the amount option. This determines how harsh the distortion will be. From what I understand, the Amount control is quite similar (if not the same) as Drive.

Drive: The drive control varies across different plugins. Typically, Drive will either determine the input or output gain. This will saturate the sound (either more or less) depend on what you have it set to. At a low setting, it should create a softer sound. As you turn it up, you'll start to hear a much warmer and full sound, adding some harshness.

Filter: Having a filter on a distortion effect allows for control over what part of the frequency spectrum is affected. This is essentially an equalizer, but usually, will only come as high and low cutoff filter. Now, this is pretty good as it doesn't make EQ overly complicated, yet still provides you with the ability to choose specific frequency regions to distort. You can isolate the effect to only saturate the low end with a low pass filter. You can also choose where the curve starts to drop off with the frequency control. To distort the higher frequencies instead, you can use a high pass.

Dry & Wet: As per usual, the majority of all software effects have a dry and wet knob. In distortion plugins, you'll often find it called "mix" which just refers to the mix of the dry (unprocessed) sound with the wet (distorted sound). Some will come as two individual controls, while others will be together in one knob or slider.

Distortion is an effect that will react to the amplitude of the signal that passes through the effect plugin. To change the tone of the distortion, you can increase the gain of the input signal and then reduce it after it has been processed by the effect to return the dB level back to normal.

The frequency of the input signal can also have an impact on how the distortion plugin affects the signal. Automate the input frequency by using an EQ or a Phaser to create movement in the input. It’s critical to add this frequency change before the distortion on the effect chain.

When dealing with distortion in a mix, it’s good to balance distorted & un-distorted sounds to complement each other. Using this effect on too many elements or simply having too much on a single sound can lead to a perhaps obvious unpleasant sound, so be disciplined with using it.

Learn more about how to use audio effects in music production.

If you liked this tutorial about how to use audio distortion in music and sound design, share this with a friend! Thanks for reading, let me know what you think in the comments below.