How To Use A Phaser Effect Plugin 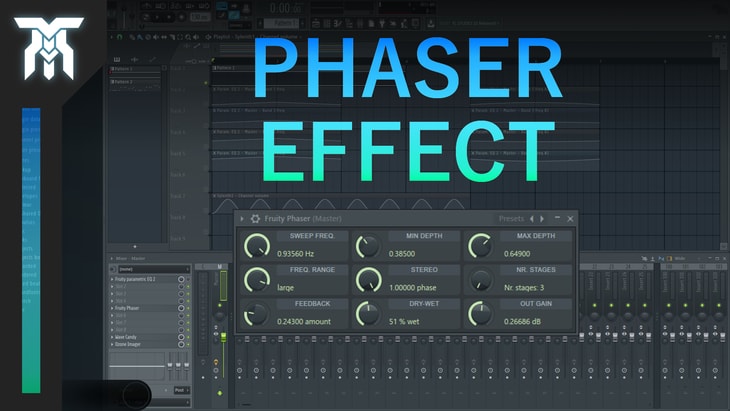 If you’re wondering how to use a phaser effect plugin to give life and motion to your sounds, stick around to find out what everything does, and to learn about phasing in music.

This is a good tool for sound design but can be slightly intimidating at first. This phaser effect tutorial will show you will get you past the confusion and you'll be well on your way to designing better sounds and music with this kind of effect plugin.

What Is A Phaser Effect & Why Use It?

The first thing that should be pointed out is what a phaser effect is. Made up of a series of notches in a frequency spectrum, you can think of it as a progressive equalizer that automates frequency cuts by using an internal LFO (or low-frequency oscillator).

Creating movement and progression in the sounds you make is typically the reason why you would use this kind of effect in your composition and sound design.

Spread: Now, all of these notches can be pulled close together or spread apart by using the spread control. The closer they are, the more obvious of an effect it will have. As you turn it up, the phaser becomes more subtle.

L-R Offset / Stereo: To create an offset of the center frequency for the left and right channels, you can widen the stereo image with an LR (left-right) offset.

Width: If your phaser comes with a width or a stereo parameter, it will typically change the effect from mono to stereo sounding.

LFO Gain: Some plugins will come with an LFO gain option as well, simply setting the amplitude of the LFO. At zero it turns the LFO off and as you move it up, it will make the LFO more noticeable.

Feedback: Feedback determines how much of the output is fed back to the input. This creates resonance peaks in the spectrum allowing you to give the phaser a resonating sound.

Stages: This will change the number of stages the effect will have. This will determine how many notches are made in the spectrum by the phaser and there will typically be half as many notches as stages.

For example, if the number of stages is set to 8, it will have 4 notches. If there are 32 stages, it will likely have 16 notches.

Dry & Wet: The dry and wet values on pretty much all effects control how much of the affected signal will be mixed with the original dry signal. In some cases, it will also change the phasing depth. A wet signal is what the phaser will produce (basically the sound that’s sent through the plugin will be wet when it comes out.

The dry signal is what you would hear directly from the instrument itself, without any sound being processed by the phaser. To achieve a dry signal, you can either lower the wet all the way down or just turn off the effect, which would just bypass the plugin.

There aren’t many specific tricks to phasing that I know of. Personally, I like to use Phasing with a low LFO gain and rate. This gives drones and drawn out notes a subtle movement that doesn’t throw everything out of balance.

If you’re looking for a lighter application of this type of effect you can use a Flanger (which is just a “weaker” Phaser) or you can use a Chorus Effect to achieve similar (and in my opinion better) results.

If you think you learned something about how to use a phaser effect, share it with someone (or a group of people) that you think would like this phaser tutorial. Thanks for reading, check out the other effect plugin fundamentals if you curious about how to use other sound design effects!