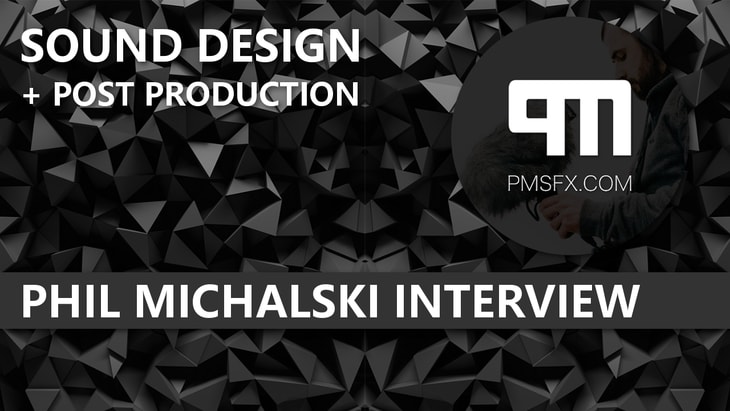 This PMSFX interview is going to break down Phil Michalski’s experience in sound design and journey in the audio industry.

You’ll learn about some of the best plugins to use when designing sound effects and how to go about making SFX too.

There is so much to take away from this interview with Phil M.

Q: How about an introduction of yourself, your experience, and what you're doing now.

I’m Phil Michalski and I’m a sound designer, audio editor, and recordist. I’ve been working in “sound” since 2006.

I started my journey at a public radio station in Warsaw, Poland after completing a 2 year sound engineering course. I was responsible for producing ads, jingles, and promos. I was also helping out with digitalization and restoration of old reel tapes and DATs.  A few years later I was a member of a team who was implementing EBU R128 loudness standards across all radio channels. Around that time I started collaborating with local filmmakers as well as making sounds for FLASH games.

In 2012 I moved to the UK and started working as a freelancer. The move was a bit painful as I had to sell 90% of the gear I owned but luckily I bought it back after a few years. At that time I was mainly working with indie filmmakers and some clients I built relationships with during my radio days.

In early 2016 I joined a multi-award-winning podcast “The NoSleep Podcast” as a senior producer. Around that time I also started selling Ableton devices and sound effect packs. Between 2017 and 2018 is when my sound effects really took off and I started producing packs on a regular basis.

Right now I’m working on a multiple of projects including a point and click cyberpunk game, The NoSleep Podcast, sound design for a bunch of iOS/Android apps as well as new PMSFX libraries.

Q: When it comes to your sound effect libraries, what are some of the most cutting-edge techniques and tools you used to accomplish what you made?

I record sounds all the time and I keep them organized and well meta-tagged. Once I know what kind of sound effects I’m going for I start pre-selecting source files.

I’m a huge fan of layering/stacking and I’ve come up with a workflow that works especially well for me.

I random-generate a lot of pre-stacked sounds. I put together an Ableton device that works similar to NI Polyplex.

It consists of 4-8 drum racks (128 slots each) and I load them up with source sounds. I have tons of (max for live) LFOs in the chain randomizing a lot of parameters at the same time such as pitch, the delay between sounds, etc. All the sounds are being randomly triggered as well. I let it record it for a long while (20-100 mins) and then I render it and import it into Pro Tools. That’s where the real stacking/layering happens.

I audition the exported file (that can be at times up to 1500 randomly layered sounds) and I make my selections. Once the section is done I start layering randomly generated pre-stacked sounds with my source sound files.

I like having my source sounds louder then randomly-generated ones - it makes it feel more real as there’s more emphasis on the organic source file rather than randomly mangled one.

Sometimes a sound effect can consist of 2-4 layers and another time it can be as much as 40. This stacking/layering technique works especially well with sci-fi/futuristic sound effects.

Plugins that Phil uses almost all the time:

Soundtoys Decapitator - it just makes everything sound so much better. It enriches harmonic content of your sounds making them stand out and cut through the mix. I especially love it in a parallel mode.

There are a few other Soundtoys plugins that I use quite often: Radiator (analog tube EQ) and Crystalizer + Echoboy - those two work especially well when working on spell/magic sound effects.

When it comes to EQ my go-to plugin is FabFilter Pro-Q 3. I love everything about it! It’s very CPU friendly, easy to use, can be extremely surgical, has a dynamic EQ mode that I use all the time and lets you load up spectrum from another Pro Q3 plugin to easily deal with frequency masking.

I also sporadically use Sonible’s Smart EQ 2 - it’s great for fixing your audio if you’re on a tight deadline.

Also recently I’ve been playing with Klevgrand’s Korvpressor and I really dig the UI. Sound-wise it’s not as good as C2 or Avid’s Multiband Dynamics but it gets the job done. I use it a lot in a parallel mode (built-in Dry/Wet knob). I used on my recent pack: Foundation Series SCI-FI vol 2.

Limiters: There are 3 limiters that I use all the time:

There are two more McDSP plugins that are great four sound designers:

SA-2 - it’s a multiband de-esser that works amazingly on dialogue/VO tracks but it’s also great for getting rid of those piercing high frequencies and therefore making your sound effects sound more balanced and easier on ears.

Futzbox - it’s a nifty distortion/lo-fi plugin that makes everything sound like it’s coming from a radio/walkie/TV/cell phone, etc.

Speaking of distortion plugins: I use iZotope Trash 2 and FabFilter Saturn a lot  - both are amazing and let you mangle your sounds beyond recognition.

Now let’s talk about reverbs. I own quite a few reverb plugins but I’m gonna focus on those are particularly good for sound design:

A bunch of other tools that I use:

Sound Particles - I bought right away when it came out. What a beast of a software that is. I like to think of it as something like a CAD for a sound designer. You can load a bunch of sounds, program particle behavior and create an amazing battlefield background sound in a relatively short time. It also has a great sounding Doppler effect.

Apart from processing plugins I also use virtual instruments to generate sounds.

My 5 got to virtual instruments are:

Q: What is your most notable work and how did you end up getting that opportunity?

It depends on one’s point of view really:) I’m beyond thankful for everyone who purchased my sound effects and having received so many messages from industry pro’s about how much they dig my stuff is just priceless and it still blows my mind.

Also, My sound effects were used a numerous of big productions such as Season 10 of Archer and Final Space.

I also did sound design for an amazing cyberpunk animation Robot Will Protect You and currently working on a huge cyberpunk point and click game and a numerous of other projects I sadly can't talk about due to NDAs.

Regarding the second part of your question - it’s all NETWORKING and ability to present your skills.

I really wish I was better at it. It’s a funny thing but a lot of sound people keep to themselves - I guess it’s easier to get into a creative mood in your own controlled environment - keeping it ZEN ;p

However, reaching out to other creatives can be really rewarding. I personally learned a lot about filmmaking, game dev-ing, etc. just by talking with people. So, if there’s someone who you’d like to work with or admire their work - just reach out to them. Worst case scenario you gonna hear a polite no.

Don’t let the fear of rejection stop you - we’re all just a bunch of (weird) creative people at the end of a day.

Q: Looking back, what paths and skills would you have avoided if your goal was primarily to become a sound designer? Is there anything you thought you needed to do then, that you later realized was a waste of time and energy?

I wouldn’t necessarily avoid doing some things that didn’t turn out great as I believe that we have to embrace our failures and learn from our mistakes.

There are a lot of things I learned this way:

Q: Besides all of your Sound Design and audio work, do you have any other creative outlets or habits that enhance your effectiveness and creativity?

I like taking photos, especially street and fine art photography. I’m also big on hiking. I think getting away from the studio is very important. It lets you switch off for a wee bit and really puts things into perspective.

Q: What is the best advice you could give to someone aspiring or just starting out in Sound Design? What about someone who's more experienced?

Learn your tools really well. And I can’t stress it enough. There’s this weird misconception that you need to own millions of plugins, microphones, recorders to get started. Start small and push your software/hardware to its limits. That’s something that I actually practice quite often. I limit myself to use only certain plugins or source sounds and I try to come up with something that I haven’t done before.

Also, to me sound design is everything between being creative and experimenting and not trying to reinvent the wheel at the same time - like everything, it’s about balance.

Like I said, there was so much information to help you as a sound designer or someone in post-production.

I hope this interview with Phil Michalski has helped you in some way. If it has, consider sharing!

Check out PMSFX (Phil) on Twitter where he posts some of his photography (of recording locations) and updates on what he’s creating.

As always, thanks for reading. 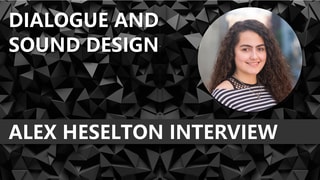