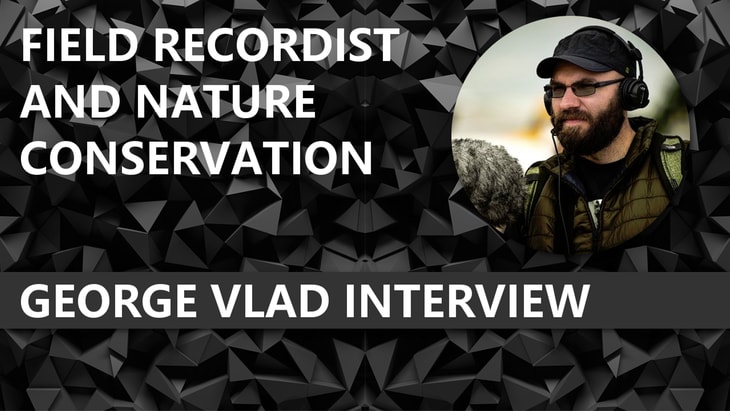 This George Vlad interview has a lot to teach regarding field recording and what kind of gear you could use.

There is also plenty about what George is up to such as conservation, expeditions, and how he managed to get into game audio.

Q: To kick it off, how about an introduction of yourself, your experience, and what you're doing now.

Sure. I'm George Vlad and I work with audio. I've been involved in music production and sound design since 2003, and before that I used to be a DJ. I 2010 I started working as a freelancer in game audio and in 2013 I took up field recording so I could justify spending time away from the studio. In 2016 I started to travel and organize longer expeditions, mainly outside Europe. Last year I took up photo and videography so I could better document my field recording adventures.

At the moment about 70% of my work is doing audio for games in the studio, and the rest is travel/field recording/photo and videography. I occasionally organize expeditions that others can join too. The results of my field recording trips can be found on my website as sound effects libraries and collaborations with companies such as Krotos.

Q: What sparked your interest in conservation and did that lead you to field recording or vice-versa?

That's difficult to say. I grew up in a pretty untouched part of countryside in Eastern Europe where it wasn't uncommon to hear about encounters with wolves, bears, lynx and other wildlife. When I moved to Western Europe I was surprised to hear about so many species that became extinct in the very recent past. I'd always been aware of the impact that humans have over wildlife, diversity, ecology etc., but when I took up field recording this became painfully obvious.

I guess these two activities stemmed from different sources but eventually intertwined and now they're pretty inseparable in my mind. I know many other field recordists who feel the same, even if they don't necessarily focus on recording natural soundscapes or wildlife like I do.

Q: Is field recording the first thing you did when it comes to audio or did you start out somewhere else?

As mentioned already, it all started with an obsession with music. This lead me to become a DJ, which in turn caused me to produce my own music. In this process I became fascinated by sound design, which lead to my work in game audio. When I overdid this by working 100-hour weeks I burnt out so I looked for a way to escape the studio, and this lead me to field recording and (back) to spending time in nature. In the end I came full circle to the days in my childhood when I'd roam the forests around the village where my grandparents lived, only on a larger scale.

Q: What was your favorite place/thing to record? Walk through the experience and what it's like to be in a situation like that.

It's difficult to pick just one favorite as I've been lucky to record numerous beautiful places. Langoue Baï in Gabon is a good candidate though. It's probably the remotest place that I've ever visited, a place where wildlife rarely encounters humans just because none live for hundreds of miles around. Poaching and logging have not yet made it there, and it's one of the last strongholds for Western lowland gorillas and Forest elephants.

We saw many elephants and gorillas, and were even charged by a huge silverback. We spent 3 days there, completely off the grid and recording continuously on several rigs at a time. It was an incredible experience, impossible to put into words. Few snippets from the recordings I made there: https://soundcloud.com/georgevlad/mafx017-demo.

Q: What is your go-to gear for recording nature, does it change with the environment/location?

At the moment I record ambience with a Sennheiser Double Mid-Side rig housed in a Cinela waterproof blimp. This has worked great in all the environments I've been to, from dry desert to way below freezing temperatures but also in very humid rainforest.

Occasionally I will also record ambience with pairs of lav mics such as DPA 4060 or Lom MikroUsi Pro into Sound Devices Mixpre-D and Sony PCM D100 or M10. If I want to focus on species rather than ambience I will use either lavs close-up or shotgun mics like the Sennheiser MKH416 or 8060.

Q: What would you suggest a beginner in field recording get for their first setup?

A so-called handheld recorder would be best for a beginner. It should not be handheld while recording though. Rycote makes very useful kits that include a grip, a shockmount and a very useful windjammer. I love my Sony handhelds (the PCM D100 is my all-time favorite recorder), but Tascam, Olympus, Zoom and others make decent devices as well.

Stay away from the likes of the Zoom H4n though, those are absolute rubbish for field recording (noisy, battery-inefficient, unreliable and the list goes on). You can always pair these handhelds with mics that take PIP such as Clippys or Lom MikroUsi.

Q: Have you noticed a decline in the sound of nature in your own recordings when returning to a location? This seems to be a concern in relation to climate change, deforestation, etc.

I haven't, but that doesn't mean it doesn't happen. I probably haven't visited the same location enough times. I also go to great lengths to record in very remote places where humans haven't wreaked havoc just yet.

Q: Do you see field recording becoming very niche-heavy or DIY in the near future as more and more sound libraries are being made? In other words, declining as a profession?

I don't see the connection between DIY or niche-heavy and field recording declining as a profession. If anything, DIY and niches can only benefit the field as a whole.

To answer your question though, not at all. A few decades ago, professional photography was largely conditioned by access to gear. Nowadays anyone can take great photos with relatively cheap equipment, and it seems like there's never been a better time to be a photographer.

Same with field recording. Lowering the bar to entry in the field is bound to cause an increase in the number of library releases, but that's a very small facet. Overall, increased awareness can only benefit the field.

I also want to mention that creating sound effects library is one of the very many ways in which field recording can be applied. Focusing on libraries as the main application of field recording is limiting and possibly even damaging. There's always sound art, sound recording related to research and conservation, sound forensics, music composition, installations, just to name a few applications.

Q: Is nature recording something you're going to stick to or do you have plans for making a pivot to different niches?

I already record more than nature and wildlife. In fact I started off with studio recording and even released a number of hard effects libraries (mechanical gears or ice). I'm also pretty fond of driving and flying, which resulted in a few libraries focusing on car, truck and aircraft recordings. I will undoubtedly record more vehicles and aircraft in the future, but at the moment I want to focus on extremely remote areas that might not survive the near future.

Q: What advice would you give to someone just starting out in the kind of work you do? Anything you would have done differently?

It's worth pointing out that everyone's circumstances are different. What worked for me 10 or 15 years ago might not work anymore nowadays. One thing I would do differently though is buy the absolute best gear I can the first time around instead of buying cheaper kit and then upgrading it every few months. I wasted quite a lot of resources this way and I'd rather spend that on trips and books.

A few examples of kit that I could have skipped are Zoom H4n, Zoom H2n, Fostex FR2LE, Olympus LS14, basic version of the GoPro Hero4, cheap XLR cables and connectors, cheap backpacks and suitcases, cheap waterproof clothing and footwear, and the list goes on. It's difficult to justify spending a lot on quality kit, especially if/when you're starting out, but is very much worth it if you know you'll be in the game for a while.