Top
Back to Resources

The Circle of Fifths 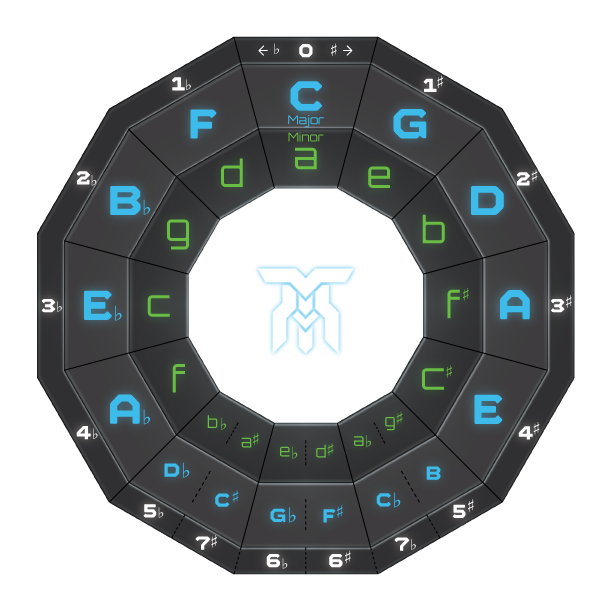 What Is The Circle of Fifths?

The Circle of Fifths is a tool commonly used by music composers to determine the relationship between heptatonic (or natural) scales.

This relationship can be seen between major scales and their relative minor scales (next to the same number) around the circle. Relative scales will use the exact same sharps or flats.

The reason this is called the circle of fifths is that the distance between each note is a perfect fifth. A perfect fifth is 7 notes/pitches (or 7 half steps). - If on piano, this includes both white and black keys.

The circle can not only be used to build scales but can also be used to make chords.

Numbers: Along the outside of the Circle of Fifths, you can find numbers paired with a sharp (♯) or a flat (♭). This represents the number of flats or sharps in the scale the number is next to, or, (in the case of 0) how it has none.

Accidentals: Sure, the Circle displays how many accidentals (sharps & flats) there are in each scale, but what notes/pitches do these apply to? These are the notes in the exact order you should use a flat or sharp with.

- This order relates to the numbers on the circle, NOT what order they will appear in the scale.

For example, E Major is on 4♯. This means it would include the first 4 notes listed above as sharps in the scale.

All you need to do is include the accidentals in the order they appear in the alphabet (after the tonic/root note). Whatever notes are missing, you'll be able to add them in as well, since all scales should have exactly one instance of letters A through G - sharp, flat, or natural.

A perfect fifth is immediately clockwise of any note for both major and minor.

The reason it's called a perfect fifth is that it's a distance of 5 steps in both major and minor scales.

How To Use The Circle of Fifths

Building Chords: Creating minor and major chords with the Circle of Fifths is quite easy. Here are a few ways.

One way you can make a quick chord progression is to simply use the two keys on either side of the one you choose (ex: C & D will likely sound good with G).

The notes in a chord are ordered based on the pitch (or where it is in the alphabet). You can transpose any note up or down an octave to change the order as well!

Building Scales: To make a scale with the Circle of Fifths you can use a path to navigate around and find each note (in order) that belongs to the scale. All major scales are built from the key using this sequence of whole and half steps: W, W, H, W, W, W, H.

Taking a look at the notes in the scale, you can "reverse engineer" the pattern used to find them on the circle of fifths. To clear things up, if you land on any of the bottom 3 "split keys" simply use either the sharp or flat version depending on the key signature of the rest of the notes in the scale.

This method also may land you on a flat when the rest of your notes are sharps and vice-versa. Although it's the correct note, you may want to rename it to its proper key signature.